TEP Staff In The Design Office 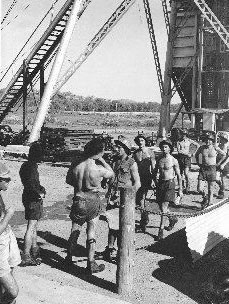 Rum Jungle prospector Jack White stumbled upon rock of the type whilst looking for manganese and advised the Darwin Mines Branch. He eventually received his cash reward of twenty five thousand pounds.

Investigations took nearly two years to prove up the find. Subsequently the Federal Government negotiated with Consolidated Zinc Pty Ltd to undertake the mining and processing on behalf of the Australian Atomic Energy Commission.

In 1952 Consolidated Zinc formed a subsidiary-Territory Enterprises Pty Ltd – to handle all operations, and in December 1952 a team of six men arrived to commence the process. TEP took over mining and management of the town in January 1953. Eventually the underground mining operation changed, with diversion of the Finniss River, and moved to open-cut.

Meantime Northern Territory Administration surveyor, Trevor Miller-son of the NT Surveyor General-had commenced the survey detail for a support township in August 1952, and the NTA Lands and Survey then set out the plan. Trevor returned to survey in detail for the housing and ancillary. The Commonwealth undertook construction, and TEP became involved, but Trevor Miller supervised each housing block so that most trees were left in situ.

Consequently Batchelor township looked established and permanent from the beginning. 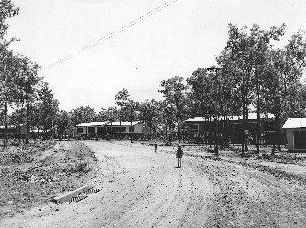 The Development Of Batchelor Town

Gertrude, wife of the civil engineer for TEP, Neil Brown, chose the aboriginal names for the streets, utilizing the one reference book in Darwin Library. The town was to accommodate 600 persons plus single mens quarters- later extended as more men came to the project. The single womens quarters for mine office workers comprised two blocks of six bedrooms, and these are the buildings utilized for the Museum development now.

Some families started out camping in the bush before housing became available. Along with the housing and single mens quarters, catering and dining, a hospital, post office, store, wet canteen and other community facilities were built , Sports and recreation were included so there are tennis courts, a bowling green, swimming pool, an oval for hockey and football.

There were many nationalities besides Australians and a large contingent of Irish workers from the UK mining company, Wimpeys. A hut from WW2 became the Uniting Church, The Catholic Church built in 1954 and the Church of England transported a Sidney Williams hut from Darwin to establish.

All this brought about a very cohesive community which functioned independently, had its own news sheet, Churches, Clubs, outdoor films, dances, parties, sporting events. There were marriages as some of the office ladies married miners. The school flourished, and the kids had memorable times exploring the surrounding bush and remnants of WW2 left there. 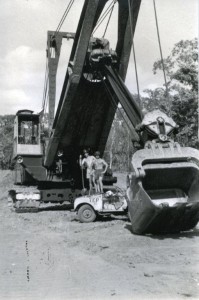 Processing of uranium and copper continued from stockpiles until April 1971. Though uranium ore had last been extracted in 1963.

It is not surprising that many of the Batchelor residents who left for other parts have returned to visit friends who stayed in the vicinity, or moved to Darwin. The 50 year anniversary of the school brought a big contingent. There has been a great response to the advice sent out regarding the establishment of the Batchelor Museum and it is timely to record the mining and other features to showcase one of the Territory’s unique places.

Written for the Batchelor Museum website By Dr Janice Hills.