When the Commonwealth took control of the Northern Territory  in 1911 the authorities  were determined to make a  full  investigation of  the economic potential of the country before deciding on a policy for developing the region. 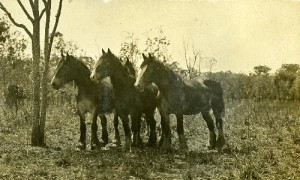 One of  the first experts appointed to do a survey of  the Territory was W S Campbell, the recently retired Director of Agriculture for New South Wales.

Campbell arrived in Darwin on 15 May 1911 and spent the next few months touring the Territory.  In the report he presented to the government, he recommended that two Demonstration Farms be established: one at Rum Jungle and one on the Daly River.  The government lost no time in recruiting a manager and workers for the farm, and in the first year some 24,000 pounds was spent on buildings, machinery and other equipment, and on clearing, cultivating, and fencing the land.  A railway siding was also built from the main track to the farm to facilitate the transport of produce to Darwin.

The South Australian politician, Egerton Lee Batchelor, was the Federal Minister in charge of the Northern Territory at this time.  Batchelor died unexpectedly just ten months after the formal transfer of the Territory from South Australia to the Commonwealth.  When a party of Federal politicians visited the Territory in April 1912, the new Minister, Josiah Thomas, announced at a ceremony at Rum Jungle that the name of the siding and of the Demonstration Farm would henceforth be “Batchelor” in honour of the late Minister.

Over the next few years the Northern Territory Times (NT Times) occasionally reported on activities at the farm.  From these paragraphs, it can be seen that all conceivable aspects of mixed farming enterprises were explored.  A stud bull, a Clydesdale stallion and “Merino type” rams were brought to the farm and suitable breeding stock introduced. Various species of fowl, including bronze-wing turkeys, were installed in the fowl yard.  An orchard was established, and any vegetable or grain considered suitable for the climate was planted as a trial crop.   Other sources of revenue were explored including the extraction of eucalyptus oil from the mallee scrub on the property.

Unfortunately, these hopeful paragraphs did not reflect the real state of affairs.  The farm, like its counterpart on the Daly River, was bedevilled by problems from the start.  The Northern Territory Administrator’s reports from 1912 onwards complained of labour troubles.  By December 1912, out of a total of eighty-five men appointed to the two Demonstration Farms, only thirteen remained at Daly River and twenty at Batchelor.  The industrial unrest in Darwin was mirrored at Batchelor with a number of strikes by the men.  Another problem at the farm was that the people working there lacked any useful experience.  On one occasion, for example, the manager attempted to dip some newly arrived cattle to protect them from ticks.  He did not know that the dip solution needed to be diluted extensively before being used and the cattle died in agony from the burns. 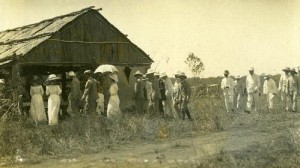 Episodes such as this caused a scandal in the Territory and the situation was not improved when, in 1913, the manager of the farm, Charles Woolley, was charged with various attempts to indecently assault the wife and daughter of one of the Russian workers.  He was found not guilty of the charge, but the editor of the NT Timeswas charged with contempt of court for criticising the behaviour of the judge during the trial.  He was found guilty and fined one hundred pounds, which the townspeople of Darwin promptly paid on his behalf.

While there were many failures, the farm did of course manage to grow some crops.  The NT Times of 12 March 1914, for instance, announced that a truckload of melons and pumpkins from Batchelor Demonstration Farm was to be auctioned off on the following day.  The paper added that the cabbages would be ready to sell in about six weeks.  There is a story that is still repeated today that, in the first year or so of the farm’s operations, an enormous pumpkin was grown there and the Administrator, Dr Gilruth, was photographed beside it.  It was apparently left on the railway siding prior to being sent to Darwin and, according to the NT Times, ‘some bad, bold Bolshevik’ stole it.  Someone, somewhere, labelled this the £4,000 pumpkin, presumably as a wry comment (and pun) on how much money had been spent to produce it.  Whatever the truth of the story, the £4,000 pumpkin became another way in which the local population poured scorn on the farms and another weapon which was used in their campaign to discredit Dr Gilruth.

By 1916, the government was seriously thinking of closing the farms, but nothing was done at the time, probably because the authorities’ attention was focussed on the war in Europe.  In 1919 however, three senior civil servants conducted in inquiry into the farms and recommended that they be closed.  Two of the gentlemen recommended that the Batchelor farm should be used to house the Aborigines then living in the Kahlin Compound at Myilly Point.  At a meeting of the Northern Territory Advisory Council on 6 October 1919, the Chairman, H E Carey announced that the Demonstration Farms at Batchelor and at Daly River had been closed.  The Northern Territory Annual Report of 1920 noted that the cattle stations at Oenpelli, Mataranka and Batchelor provided beef to the local butchers, and that the demonstration farms at Daly River and at Batchelor were now Aboriginal compounds.

The original idea of moving the Aborigines from Kahlin Compound to Batchelor seems to have been forgotten as Kahlin remained in operation until Bagot Reserve was established in 1938.    Apart from a letter written by the current Minister in charge of the Territory in 1921 noting that Administrator Urquhart wanted the cattle stations at Mataranka and Batchelor leased to private enterprise, there are no more references to the farms or indeed the settlement at Batchelor until the 1930s when the north was preparing for war.

The history of the Batchelor Demonstration Farm